A recipe for apple berry cobbler 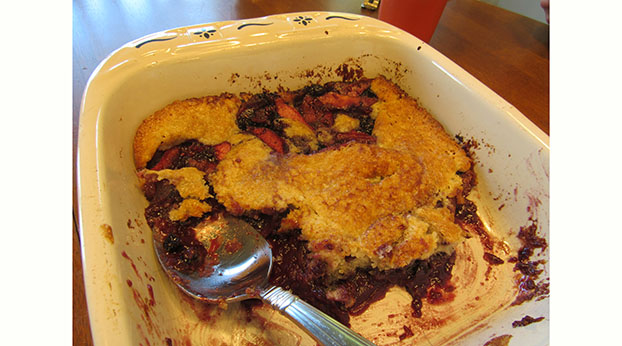 I was watching one of my favorite Food Network shows, Delicious Miss Brown with Kardea Brown, when she made a great looking Apple Berry Cobbler.  I didn’t write down the recipe, because I knew I could get it off of the foodnetwork.com web-site if I ever wanted to make it.

Some of Brad’s friends were coming to stay with us the night before they all headed to northern Minnesota for their annual camping/fishing/roughing it trip and I wanted to make a dessert for their last home cooked meal before heading to the woods.

I had apples in the refrigerator and berries in the freezer so it seemed like the perfect time to make this great sounding dessert.

Supper was on the stove and in the slow cooker so while the guys were packing up the truck and preparing for their adventure, I turned on the oven to preheat and got to work putting this cobbler together.  I figured it would bake while we ate and once everyone’s supper had settled it would be done.

I whisked the dry ingredients together and stirred in the half and half, mixing just till it was combined.

Instead of melting the butter on the stove or in the microwave I just put it in the baking dish and placed the dish in the oven while it was preheating.  When the butter had melted, I poured the batter over the top and sat the dish on a cooling rack while I put the fruit filling together.

After placing all of the filling ingredients in a medium size pan, I turned on the stove, brought the mixture to a boil, then turned the temperature down a bit and let it cook for a couple of minutes. When I watched Miss Brown prepare this dish I noticed that she didn’t cook the fruit until it reduced and thickened so I just followed her lead and did the same.

I gently scooped the filling and liquid over the top of the batter and placed the baking dish in the oven.

While we were eating supper, I let the guys know dessert was in the making, so they might want to save room in their bellies.  About the time we were done eating supper the timer sounded and I pulled the cobbler out of the oven.  It cooled a bit while we cleared the table and then we were all ready to dig in.

Everyone served themselves and some topped their portion off with Reddi Whip and/or ice cream.

One bite and I was sold.  The dish reminded me of a lot of the quick cobbler recipe just about everyone has in their recipe arsenal, but this one was just better.  The cinnamon and nutmeg really set this apple berry cobbler apart and it wasn’t overly sweet either.

All of the guys agreed that I nailed this recipe.  Another one added to my self-made cook book.

1 cup half and half

Preheat the oven to 375 degrees.

Whisk together the flour, baking powder, salt and 1 cup granulated sugar in a bowl.  Stir in the half and half mixing just until combined.

Bring the berries, brown sugar, lemon juice, cinnamon, nutmeg, apples, 2 tablespoons water and the remaining 1/2 cup granulated sugar to a boil.  Cook for 2 minutes more.  Pour the fruit and syrup over the batter in the baking dish without disturbing the batter layer.

Bake until golden brown and puffed on top, 45 to 50 minutes.  Let cool slightly before serving.