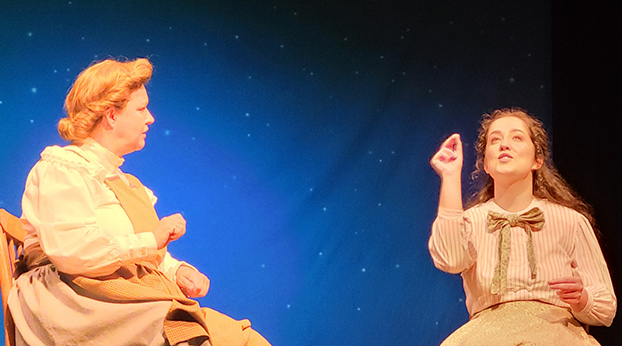 Elena Guerra, on the right, as Emily Webb.

“Our Town” by Thorton Wilder was the first drama performed at the Leeds Center for the Arts when it reopened as a venue for the performing arts in 1990, and Friday night it will be the maiden performance after the center’s COVID-19 hiatus.

“We actually started this show back in 2020,” said Ellie Miller, the center’s director of marketing and outreach. “We obviously had to be shut down because of COVID … We are so lucky that we were able to bring it back have this be our first show to reopen the theater.”

The pandemic has brought a set of unique challenges to the rehearsal process.

“We are doing everything we can to keep everyone safe. We’ve masked our rehearsals, and we’ve asked for everyone to be vaccinated,” Miller said

Tuesday night’s rehearsal was one of the first run-throughs where the actors were not masked. Each one was given a case to keep their mask safe and protected while they were on stage.

Patrons will be required to be masked and provide proof of vaccination or a negative test dated 48 hours before the performance they will be attending.

Tracey Miller, the president of the center’s board, said that the arts provided an escape for people during the pandemic.

“I think that during the pandemic, everyone turned to art. I think that art can be very healing. I think it is such an important part of who we are at the very basis of humankind,” she said.

Miller added that art brings people together “no matter who we are, what our opinions are or where we are from.”

The play was first performed in 1938 and later won Wilder the Pulitzer Prize for drama. It explores the lives of the residents of the fictional town of Grover’s Corners, New Hampshire from 1901 to 1913.

Cecily Dore, who plays the role of Mrs. Gibbs, is making her return to the stage after 21 years away.

“I was in the military. I have a small business. I’ve had children. All the things!” Dore said about why she stepped away from acting.

She stayed active with the Leeds Center in other capacities over the years, and now her children are involved in the theater.

“They are my inspiration and made me want to get back into it,” Dore said. She also wants to set an example, “If mom can do it, you can too.”

Dore’s experience as a mother made her role “easy to step into.”

“I can almost see myself in Mrs. Gibbs in waking my children up, screaming ‘Come on, you guys, get it together,’” she said.

Mrs. Gibbs desires to travel the world throughout the play, something her doctor husband is not keen to do.

The need to be something more also drew Dore to the role.

Does Mrs. Gibbs get to see the world? Dore said to see the play and find out.

A Modern Woman in an Old Fashioned Role

Elena Guerra plays Emily Webb and said she believes that her character is more than her world sees her.

“I like to think that she is a lot more than her connection to her husband. She’s funny, and she’s smart,” Guerra said.

In her character notes, Guerra said that she wrote that in physicalizing the character, she wanted to be more contemporary in arguing with a man.

“Very carefully and very honestly,” she said with a laugh when asked how to argue with men in 2021.

Bringing a modern mindset to her character is something that Guerra has been careful with.

“I know I’m not watering down my experience as a woman by playing it the way it the way it was meant to be played. It’s honoring the women that came before me,” she said.