Time to cut back the kudzu 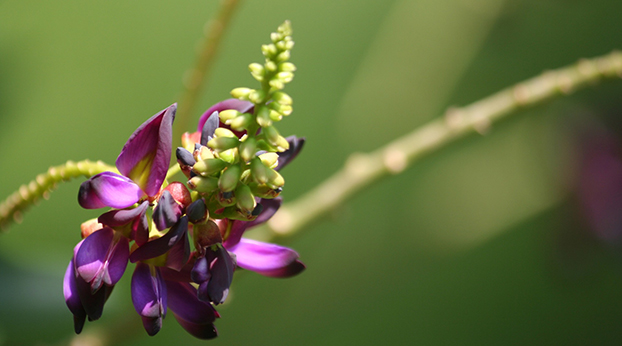 My mom spent her summers in Breathitt County with her double first cousins, which happens when two siblings marry two siblings. The resulting kids share every relative except parents and, even though she is technically from Winchester, my mother considers the mountains her home.

When I was little, we would drive back to visit the myriad family members. I could never keep straight who belonged to whom in a family tree so twisted and tall. We’d take the Mountain Parkway to Jackson and then keep going a fair bit until we got to Lost Creek, where everything was green.

In Lost Creek, the mountains are waterfalls of emerald, every tree, root, telephone pole, or abandoned appliance awash with thick jade leaves.

The first time I recall seeing those green hills dotted with purple flowers, I was mesmerized. It was like stumbling upon Jack’s magic beanstalk. I smashed my nose against the window of the car to get a better look. “It’s so pretty!” I whispered in awe. My mom drew her head back as if she’d been slapped.

She explained that it was called kudzu and it was to be detested. Later on, one of my uncles told me it’s called mile a minute in the mountains. And while it doesn’t actually grow that quickly, it can grow up to a foot each day. In the 1940’s, the U.S. Soil Conservation Service heavily promoted kudzu as a bulwark against soil erosion. But without the disease and pests of its native land, this East Asian transplant flourished too well, insidiously carpeting vast swaths of the South.

When I was in college, I learned that kudzu releases carbon sequestered in the soil, speeding up climate change. The next time we were in Lost Creek, I asked what could be done. That same uncle – or possibly another, you can’t throw a rock without hitting an uncle in my huge family – said that there were some pesticides that worked “alright, but what you really wanna do is get yourself a sharp hoe and cut the bugger back. You gotta get to the root.”

My friends Kara and Allison have recently been sharing mindfulness techniques for resilience to educators across the state. One exercise they lead is guiding attendees to notice their breathing for a minute or two and then notice how they feel after checking in. Then Kara and Allison offer anonymous space for the attendees to write on a sticky note one word that best describes their emotional state. Later, my friends tallied the words to see correlations across the groups of teachers, principals, superintendents, and administrators. Take a moment before reading on to guess the word that, so far, has been cited most often.

Of course it is. We’re all so overwhelmed right now. Most of us hit crisis fatigue last winter and yet the pandemic rages on. Crime and violence rage on. Unemployment rages on. Vax and masks disputes rage on. The weather grows ever more worrisome and unpredictable. Our digital leash pulls ever tighter, strangling us at the same time it entrances us. And with overwhelm comes exhaustion, rage, disgust, despair, desperation, disengagement, hypervigilance, anxiety, and grief.