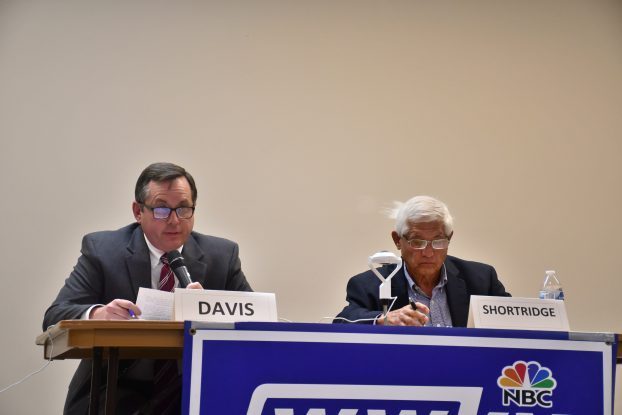 This November, incumbent 5th District Magistrate Chris Davis (R) will be defending his seat on the Clark County Fiscal Court against Leonard “Leo” Shortridge (D), but before that, the voters heard from both men at an Oct. 3 forum held at the Clark County Cooperative Extension Office.

To open, Davis recapped several of the fiscal court’s achievements over the last several years, including rebuilding and re-equipping county roads and fire departments. His background is as an attorney.

Shortridge emphasized he is a lifelong resident with managing experience from his work at IBM. He serves on the board of adjustments as a part of planning and zoning and, as a self-described conservative democrat, would be a voice for the community.

Among the questions asked was whether they would be in favor of a county-wide policy supporting fairly priced housing and rental properties.

“I think we could work and set some guidelines on that that would be helpful to the renters and also to the property owners,” said Shortridge. “Yeah, I think it’s something that needs to be looked at because we’ve got a lot of folks that are renting today, and I know the costs have gone up a bit.”

Davis said he is not a fan.

Both candidates were asked to explain any pros and cons of industrial solar.

Davis responded it could be a supplement to personal homes or business.

However, he added, “a con would be [that] it’s going to take up thousands of acres potentially across the country that could be used for productive purposes. And…many of those [solar panel] components can not be land-filled anywhere.”

Stating that he wasn’t necessarily for it, Shortridge responded that a pro might be that farmers who have the property and get the money out of it can be well-served.

However, he said, “I don’t think there’s enough known about all this solar stuff yet. I don’t believe that that’s going to happen. I think that’s wishful thinking on a lot of this stuff. It’s going to be a supplemental; it’s not going to be something firing everything coming and going.”

The next question asked the candidates to discuss what their priorities would be if they were elected.

Davis noted that infrastructure – including broadband and a sewer project to avoid environmental troubles – were key priorities.

Shortridge responded that looking at additional projects to be completed – including work along the bypass – was essential. He also wanted to focus on cordiality between the magistrates.

Last, when asked what Clark County looks like in four years, Shortridge said he saw bringing in more jobs industrially and otherwise. He also stated that doing work on the bypass would produce many benefits.

Davis sees a bright future with a pro-growth county government, more housing options, and many opportunities because of construction.